“Version Update” is the term we use to describe updating your CIMcloud platform from an older version (or release) of CIMcloud to the latest “current” version. This article provides an overview of the stages of work involved in the Version Update process from requesting the version update to publishing it.

This article covers the two (2) version update “paths” (or processes) we follow, as well as details on what you can expect with each one.  This includes cover details on:

There are two process paths that Version Updates follow.  CIMcloud can help you determine which path makes the most sense for your specific situation.  We do this by factoring in 1) the complexity of your platform, 2) the amount of customizations you have, and 3) the size of the version update “hop” you are about to take.  Note: the “hop” size refers to how many patch, minor, and/or major versions you are about to jump to get from where you are to the latest version of CIMcloud.

The following is an overview diagram of the two version update process paths, including an indicator of which copies of the CIMcloud platform (and environments) apply.

There are a few key concepts that your need to understand before diving into a live version update project.

The following is an overview diagram of the Simple Version Update process. 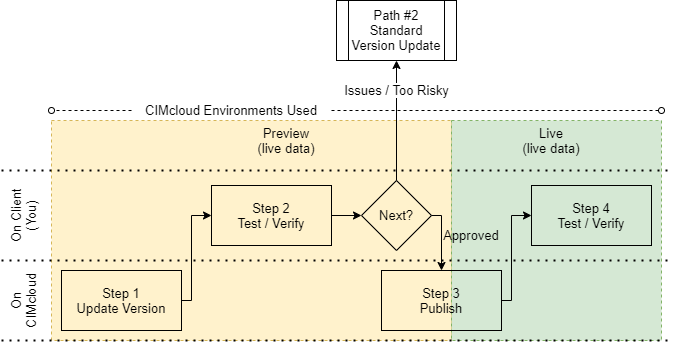 The following conditions must be met to use the Simple Version Update path.

The terms “Compatibility Work” and “Client Work” are described in more detail below.

This is a visual overview of the 3 stages involved in a typical live version update project. The time it takes to get through each stage largely depends on 1) your engagement level in the process, and 2) how much Client and Compatibility work is needed to prepare for the Live Roll-out.  More details on the steps within each stage are included in the “Process Details” sections below. 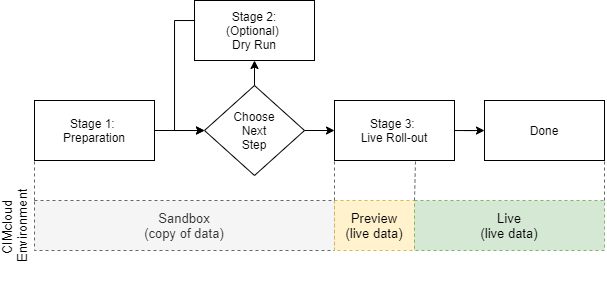 There are several key assumptions that you need to know and understand to successfully execute your next live version update project.

This article provides and explains a sample version update project tracking tool that the Project Manager and Lead Operator can use to manage a Live Version Update project on the CIMcloud platform. It also includes a walk-through explanation video of the tool, including context on why the different parts of the tool can be useful.

The following is a breakdown the the typical steps and tasks in each stage of the live version update process.

Common Triggers to Start The Process

There are three common triggers that start the version update process outlined below.

Key Information: The Preview Copy and Live Copy of CIMcloud both use your Live database/data and Live images / files.