This article explains the process that the CIMcloud product teams take to fix an “issue” (also referred to as “bug” or “gap”) in the CIMcloud core product.  For the purposes of this article, a product “issue” is something in the CIMcloud’s base package or add-on bundles that is not working the way it was designed or intended to as determined by CIMcloud’s Product Management team.

This is a high-level overview of the process:

If your issue is identified as a true product gap or bug in the core CIMcloud product, we will classify it into one of these three process flows to address or “fix” it on your CIMcloud platform.

The following provides additional details on each of the three process flows to fix core product issues.

In some cases, the product issue you reported has already been fixed in the latest version of CIMcloud and you just need to be updated to that version.  If that is the case, CIMcloud will work with you to complete a Version Update on your application, which should address the issue. 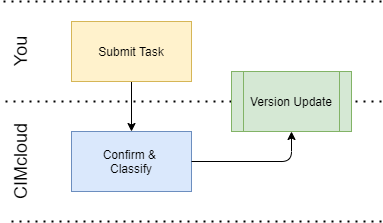 This process flow is intended to provide an emergency “hot fix” to a bug, that was previously working but is now causing hard errors, in a critical area of your live CIMcloud application.  This is something that may have been introduced or revealed by an internal (i.e. new CIMcloud version or data/setting change) or external (i.e. new browser version) change.

This process flow is most typically seen when you are implementing one or more complex add-on bundles that are less frequently used and have large variations in configuration options, data complexity, and ERP-synced data.  Complex add-on bundles include: product configurator, multiple erp company files, power customers, multiple currencies, customer sites (if you have large quantities and variations), recurring and future orders, multiple shipments per order, etc.

When gaps or bugs are reported and confirmed, CIMcloud makes commercially reasonable efforts to address them as quickly as possible.  With that said, there are multiple steps involved in getting changes planned, completed, tested, and released.

Most issues that fall into this process flow (process flow #3) will end up in an upcoming “Patch” release.  These are the most frequent releases.  CIMcloud runs “Patch” releases every week, but it may take several weekly cycles for your issue to flow through to a release.

To help set realistic expectations, the following is considered a reasonably quick turn-around time on issues that are immediately prioritized in the schedule.

Note: Critical / blocking issues will be prioritized above non-critical / non-blocking issues.  As a result (and depending on product engineering team backlogs / loads), non-critical issues may sit in the “Schedule” stage for weeks before we start actually working on making the changes.  The scheduling priorities are determined by the CIMcloud Product Management team based on need and impact.